I have really appreciated getting to know Greenie, TJ,and the entire team at RAGBRAI during my 12+ years as President of the Iowa City/Coralville Area CVB.  We have been fortunate to host a RAGBRAI overnight many times in Coralville, North Liberty and Iowa City over the years and each has been a ton of fun in both the planning and execution.

Because of the flooding in our community I was not able to start at the Missouri River with the rest of the crew this year for the pre-ride.  I began by arriving in Des Moines on Tuesday afternoon and served my penalty for beginning a few days late with a nasty cold and wet ride from Des Moines to Knoxville. Buckets of rain in the opening hours but even so it was quickly obvious that day 3 (Des Moines to Knoxville) will likely be the most heavily attended day of the ride. Very easy and some just terrific pass through towns.

Early this morning a few of my good friends arrived to join us for the rest of the week.  Nate Kaeding, former Hawkeye and now retired NFL kicker, and Luke Eustice who is the Director of Operations for Iowa Wrestling.  Both have been itching to try RAGBRAI after I got them into cycling a few years back.  Nate will ride the full week this year with our Team Spare Tire.  Hopefully Luke can make a few days as well but his “butt is hurting” from his very first 50-mile plus ride so we will see.  Kid is on a mission to find a “better seat” somewhere in Oskaloosa tonight.  We will see.

Anyway, GREAT easy day here from Knoxville to Oskaloosa.  Very scenic.  I’m going to turn this over to the RAGBRAI virgin (Nate) to give you some of the highlights of the day.

Thanks Josh for the invite to the pre-ride. You hit it on the head…I’m a RAGBRAI rookie! After four football training camps with the Iowa Hawkeyes and nine with the San Diego Chargers, I’m finally free during the last week of July to participate in one of Iowa’s greatest sporting traditions.  I’m an amateur cyclist (at best 300 miles/year) but now that I’m retired from the NFL I hope to up my annual mile count.  But as my wife constantly reminds me, I already have too many “hobbies” so I try to make the most of my limited time in the saddle.

After a 4:00 A.M. wake up in Iowa City we met the group at the courthouse in Knoxville for a 7:00 A.M. pushoff.  The highlights of the day for me included:

A. The scenic trek over Red Rock Dam en-route to Pella where the vultures were (literally) circling Luke as he struggled with his new equipment.

B. A great breakfast (Greek omelet and homemade waffles) at the Windmill Cafe just off of the historic town square in Pella.

C. Close encounters with both dead (a beaver the size of a large pig) and alive critters (a snapping turtle crossing the center line just outside of Pella).

D. Chatting with the folks of Bussey where we stopped for lunch.  Todd Spaur took 14 weeks to paint an impressive mural on the side of the old Chick’s Cafe and he gave us a step by step recap of how he pulled it off.  Todd and his artwork were featured on the Today Show a few years back.

All in all it was a great first leg.  South-central Iowa is a part of the state I haven’t spent much time, so it was great to see first hand the topography and beauty of the region.  Now we are off for a big night in Oskalooska!

Josh Schamberger is the President of the Iowa City/Coralville Area CVB.  He has completed 7 RAGBRAI’s and 6/7 days of last years ride.  Ran into a little hydration issue resulting in something called rhabdomyaloysis.  He has also served as multiple overnight co-chair.  Follow Josh on Twitter at @joshschamberger.

Nate Kaeding is a former Iowa Hawkeye All-American and nine year NFL veteran.  He recently retired from the NFL and will be participating in his inaugural RAGBRAI this year. Follow Nate on Twitter @KaedingIowa. 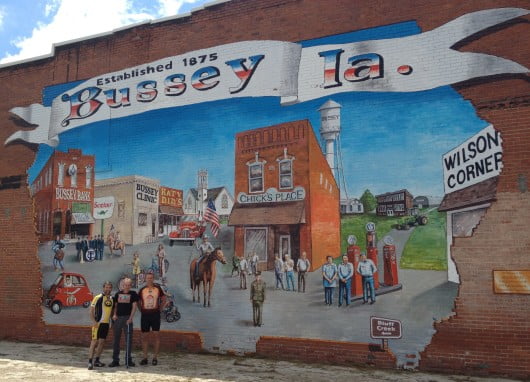